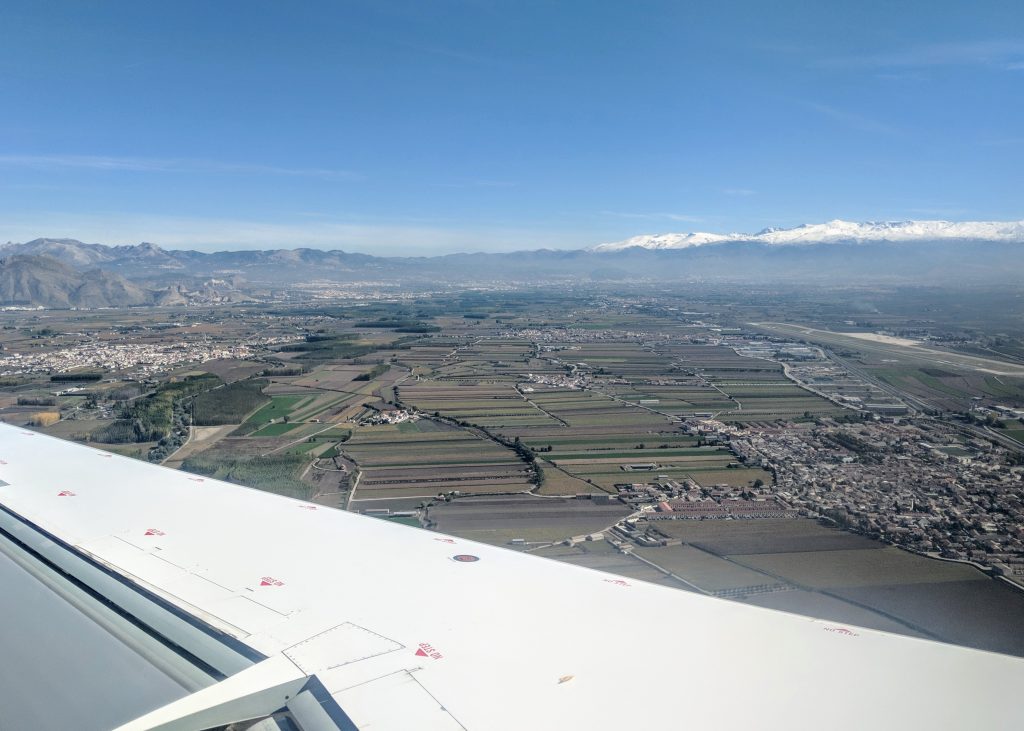 That was crazy. My girlfriend and I recently booked a ton of flights around the world. We needed to get from Europe to South America, then travel all around South America before heading to the USA and back to Europe before I fly off to India in mid-February.

It’s not usually how we travel – to have 3 months planned out and booked before we arrive – but this time, it was the option that worked best given our tight schedule.

Our Flights Around the World

When we finished all the bookings, I didn’t know what to do. Celebrate? Sleep? Shower?

Here’s what we booked:

In 18 years of travel I’ve never booked so many flights in one go!

The Cost of All These Flights

At first glance, it would certainly be understandable to think that the above 13 flights around the world cost us an absolute fortune in total. I still have a difficult time looking at all those flights and not thinking that myself.

However, while that colorful array of air journeys certainly didn’t cost $200, the grand total of those trips…

That’s an average of about $169 per flight. Some of those trips are 1 hour long, others are 14 hours and the rest are in between. And in the end, those flights will take us to 4 different continents over a period of almost 3 months. That’s remarkably inexpensive if you think of what we’re getting for that amount of money.

My Process of Booking Flights Around the World

My usual flight booking process is this:

(I know a lot of people use Skyscanner and Momondo but I’ve personally never found a cheaper fare on either of those websites.)

#2. Play around with dates and destinations.

Since my plans are rarely 100% set in stone, I always play around with various dates. I also play around with different orders of the destinations. For example, with our flight from Medellin to Fort Lauderdale, changing the date by one day reduced the price by $90. Going from Rio de Janeiro to Ushuaia and then to Buenos Aires was $150 cheaper than going from Rio de Janeiro to Buenos Aires to Ushuaia. Flexibility is key!

I always try to group flights together. On this South America trip, booking separate flights was more expensive than grouping together Rio to Ushuaia, Ushuaia to Buenos Aires and Buenos Aires to Santiago. Grouping those three together in a multi-city search saved us $200. (But booking Uyuni to La Paz, Bolivia was much cheaper on its own. That flight cost $85. When grouped with other flights, it increased the overall price by $130.)

From Cusco, Peru to Medellin, Colombia, it was also much cheaper to group two separate one-way tickets together than to book one complete ticket all the way through. By booking Cusco to Bogota and then Bogota to Medellin, we saved $110.

Here’s another great example: I once needed to fly from Budapest to NYC. The cost of the one-way flight was $650 at the time. I then decided to try and group it together with another flight I knew I needed to take 4 months later – Miami to Delhi. The airfare went down to $625, total! I ended up with two long-distance flights for the price of one.

Grouping random flights is one of the best methods for reducing airfares in my experience.

Once I find the lowest fare from the websites listed above, I’ll generally visit the specific airline’s website to see what they offer directly. Sometimes, the fare is the same or even lower. When that’s the case, I book it on the airline’s website as this takes away the middleman and is much easier to deal with, especially if there’s an issue at some point.

However, sometimes, as was the case with LATAM Ecuador, the fares on their website were MUCH higher than what we could get on Kayak for the same flights. In these instances, I definitely go with Kayak or Orbitz or whichever site offers the lowest fare. While it’s convenient to book directly with the airline, it’s not usually worth a few hundred extra dollars to do so!

If it’s a multi-city/grouped flight, it depends on whether it involves one or multiple airlines. If it’s one airline, it can be booked on the airline’s website and if it’s multiple airlines, it usually needs to be booked through the site offering the deal.

Our flight from Fort Lauderdale, Florida to London Gatwick is with Norwegian Airlines. I saved $37 by going to Norwegian Airline’s Swedish website versus using their English-language website, where the same flight was more expensive.

It’s a little tricky since there are often dozens of different languages you could test for each airline. But I will generally try a couple of versions, usually the native language of the airline and another country nearby, just to see if there is any difference in airfare.

I’ve started doing this with anything I purchase online. Before I confirm the purchase, I’ll do a Google search for the name of the website or company followed by the words ‘discount code’. Something like “TAP Portugal discount code”.

Every now and then I find something that works. Maybe it’s $10 savings, maybe it’s 10% or more. All it takes is a few seconds and you could end up saving some money so it doesn’t hurt to try!

It Takes Time to Find the Best Airfares

Finding good airfares is not really complicated. Sure, there are some tricks involved, but it really just requires time. Search, compare, tweak dates, tweak destinations, group flights together, search again…and again and again.

But if you simply don’t like searching for flights, you might not want to spend as much time as I do looking for deals. I usually spend what my girlfriend describes as ‘way too much time’ trying to find cheaper fares. In the case of our 13 flights around the world above, it really did take us a solid 3 days, searching about 3 hours per day, until we finalized everything.

But we did save over $1200 each based on the total price we started with from our initial searches. I’ll take a $1200 savings any day for a few hours of work over a 3 day period!

The extra research also led to more direct flights, shorter layovers and better departure and arrival times. For me, the extra research is worth it even if all I get is a later flight that doesn’t require me to wake up at 4:00am. Also, I landed three flights in premium economy class (it was cheaper than regular economy for some reason), a bonus I certainly won’t turn down!

What’s the best flight deals you’ve ever found? Any advice to add?

The post How I Booked 13 Flights Around the World for $2200 appeared first on Wandering Earl.

END_OF_DOCUMENT_TOKEN_TO_BE_REPLACED

The Coolest Airbnbs in Utah

END_OF_DOCUMENT_TOKEN_TO_BE_REPLACED

Facebook
Twitter
Google
Email
Pinterest
Odnoklassniki
WhatsApp
Two sets of couples using selfie sticks at the Acropolis during pre-pandemic times in Athens, Greece. SkiftSkift Take: Who knows what the next few months have in store, but the PM is right about one thing: any success in the tourism sector is entirely dependent on an effective vaccine rollout in Greece's feeder markets. — Jason ClampetRead the Complete Story On Skift

END_OF_DOCUMENT_TOKEN_TO_BE_REPLACED

Hotels Hope Profits Are Cooking in the Ghost Kitchen Business

Facebook
Twitter
Google
Email
Pinterest
Odnoklassniki
WhatsApp
The Graduate Berkeley (pictured) is the first to host a multi-branded ghost kitchen in a partnership between parent company Graduate Hotels and C3. Graduate HotelsSkift Take: The pandemic has produced unlikely partnerships between the hotel and office sectors, but the longevity is up for debate. The ghost kitchen pairing between hotels and an outside food operator may actually stick for years to come, as it solves a pre-pandemic revenue loss problem. — Cameron SperanceRead the Complete Story On Skift

END_OF_DOCUMENT_TOKEN_TO_BE_REPLACED

Loyalty Goes Both Ways in a Pandemic When Airlines Exit Markets

Facebook
Twitter
Google
Email
Pinterest
Odnoklassniki
WhatsApp
After announcing its exit from long-haul flights due to the pandemic, Norwegian Air on Monday issued a pause to its frequent flyer loyalty reward program affecting millions of passengers worldwide. SkiftSkift Take: Many global airlines have reduced long-haul flights or exited markets altogether due to the pandemic, but more often than not their loyalty points have an expiration date. Now is a really good time for airlines to put customers first and adjust their valuable currency — or risk losing their loyalty. — Ruthy MuñozRead the Complete Story On Skift

END_OF_DOCUMENT_TOKEN_TO_BE_REPLACED

Facebook
Twitter
Google
Email
Pinterest
Odnoklassniki
WhatsApp
Skift Take: The vaccine rollout is fueling optimism among Asia-Pacific’s travelers and the region’s travel industry. But until inoculations are widespread and the right systems for recognizing official health documents are in place globally, extra layers of protection — such as testing — remain key to traveler health and safety. —Read the Complete Story On Skift

END_OF_DOCUMENT_TOKEN_TO_BE_REPLACED

Europe’s Complicated Path Out of the Pandemic: New Skift Research 🔒

Facebook
Twitter
Google
Email
Pinterest
Odnoklassniki
WhatsApp
Gondolas on the waters around Venice Gerhard Bögner / PixabaySkift Take: We often talk about Europe as a single travel destination, but it exists of 44 sovereign countries with an immensely heterogeneous tourism offering. As a result, the impacts of the coronavirus pandemic are also heterogeneous. — Wouter GeertsRead the Complete Story On Skift