What to Know About Bourbon Street Before You Go 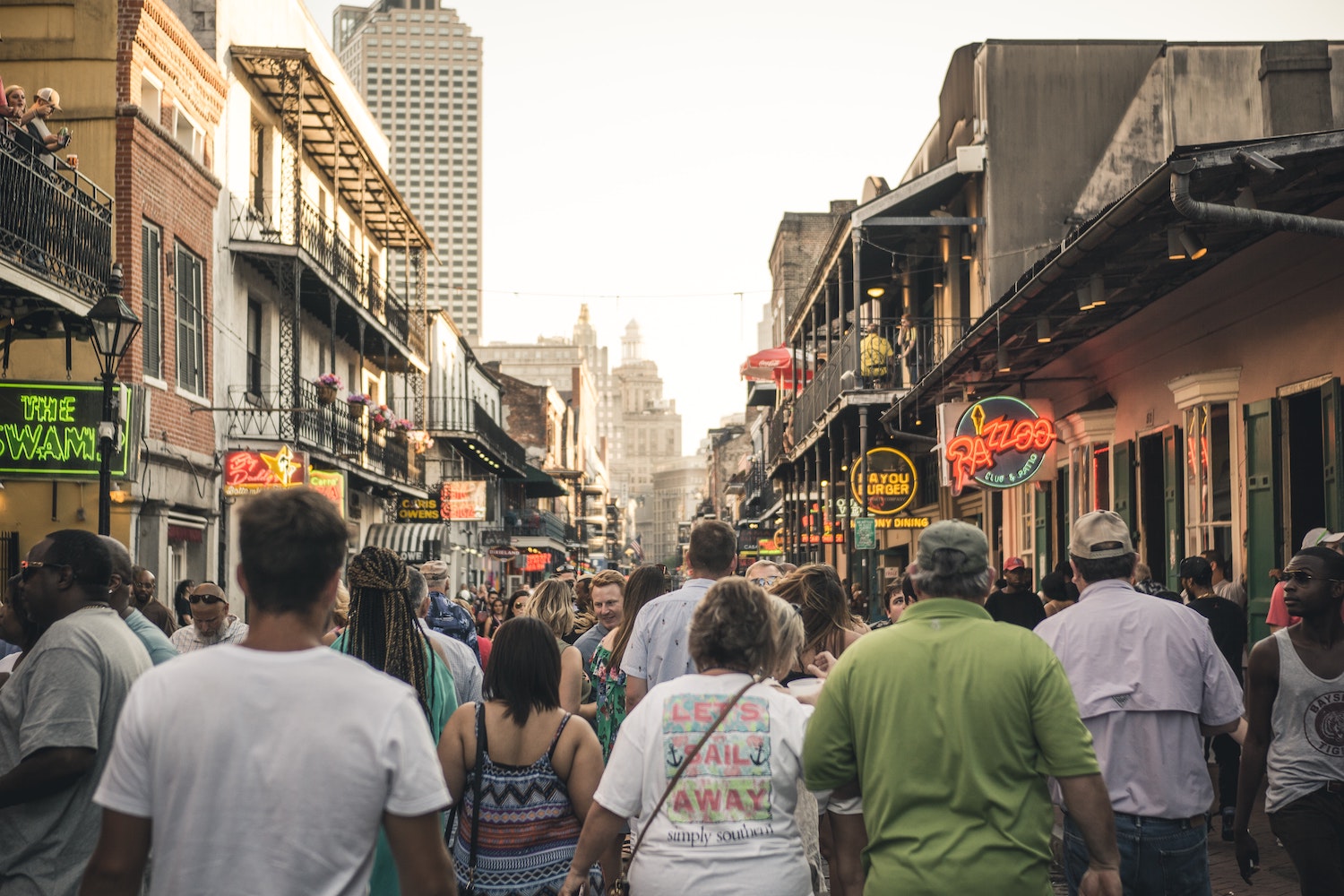 Whether you love it or hate it, for plenty of visitors to New Orleans Bourbon Street is the ultimate embodiment of this hard-partying, good times-loving city. Noisy, raucous, and exciting all night long – it is a remarkable avenue that doesn’t really have an equal anywhere else in the world.

Whatever your feelings about beads, hurricane cocktails, and dancing on tables, it would be unthinkable to depart on a cruise from New Orleans without experiencing Bourbon Street at least once. Here’s a quick guide with everything you need to know before you go.

Despite its booze-fuelled rep, Bourbon Street’s name has nothing to do with the brown liquor. The street was laid out in 1721 by Adrian de Pauger and named after the French royal house of Bourbon, who controlled the city at the time. Bourbon Street was a quiet residential thoroughfare until the late 19th century when the Storyville red-light district was founded a few blocks away. Ever since then its been a place for debauchery, decadence, good times, and nocturnal entertainment.

Bourbon Street is lined with bars and clubs, but there are a few which are of particular note.

Jean Lafitte’s Blacksmith Shop
This old Creole cottage is packed to the rafters with history. Shrouded in mystery, it was built at some point before the founding of Bourbon Street, and was supposedly the base of the Lafitte brothers’ piratical escapades. These days it is a moodily atmospheric spot to have a drink, and well worth experiencing.

The Cat’s Meow
An astonishingly popular karaoke bar, the Cat’s Meow embraced the art form way before singing in public was seen as part of a great night out.

Geaux cups
Did you know drinking on the street is legal in New Orleans, as long as it is from a plastic cup? This adds an extra dimension to bar-hopping on Bourbon Street, as you don’t even have to wait to finish your drink before heading to the next venue! Just decant it into a ‘geaux’ cup, and head to the next bar, drink in hand!

Despite its decadent reputation, Bourbon Street also boasts some of the finest music venues in New Orleans. Preservation Hall was founded in the 60s to celebrate the city’s jazz culture, and is a showcase for the best artists in the area. Fritzel’s European Jazz Club offers a wonderfully old-fashioned experience, while the Jazz Playhouse at the Royal Sonesta Hotel is as swanky a live venue as you are likely to find anywhere!

Bourbon Street’s vibrant, excessive, 24-hour vibe is a vital part of what makes New Orleans such an amazing city, and should be a part of any NOLA itinerary!

The post What to Know About Bourbon Street Before You Go appeared first on Wandering Earl.

Facebook
Twitter
Google
Email
Pinterest
Odnoklassniki
WhatsApp
Three friends take a picture with a selfie stick atop the Eiffel Tower in Paris. Travel bookings on one of Spain's leading booking sites hit new highs in June. SkiftSkift Take: People are traveling as much as they can, but they aren't going as far as they used to for as long as they did in the past. — Jason ClampetRead the Complete Story On Skift

END_OF_DOCUMENT_TOKEN_TO_BE_REPLACED

Facebook
Twitter
Google
Email
Pinterest
Odnoklassniki
WhatsApp
People are being asked to exercise judgement after restrictions officially lift. Christian Battaglia / UnsplashSkift Take: There's a date in sight, but that's coupled with a statement that the pandemic is not over. This is a dangerous mixed message from Prime Minister Boris Johnson.— Matthew ParsonsRead the Complete Story On Skift

END_OF_DOCUMENT_TOKEN_TO_BE_REPLACED

Facebook
Twitter
Google
Email
Pinterest
Odnoklassniki
WhatsApp
Arrival at the Cancun Airport in Mexico is always an interesting experience. Usually, immigration and customs are a breeze, but once you leave that area and head towards the exit, this is when things get hectic. When it comes to Cancun airport transportation, many visitors find the process to be a real headache. It begins with passing a dozen or so rental car and other transportation desks, where the staff will undoubtedly start calling out to you to try and get your attention. Then, a minute later, you enter the welcome hall, where dozens of semi-official looking people will start approaching you, also trying to convince you to use all kinds of transportation services to reach your hotel, Airbnb or wherever you might be staying. It’s confusing, it can be intense and it’s not a very relaxing...

END_OF_DOCUMENT_TOKEN_TO_BE_REPLACED

Facebook
Twitter
Google
Email
Pinterest
Odnoklassniki
WhatsApp
Over the years, I’ve lived in Playa del Carmen, Mexico several times. I love that city and I recommend it all the time for those looking for a great vacation and for those looking to live in a tropical, laid-back destination for a while. It’s an easy place to reach, too. I arrive at the Cancun Airport, and if I’m traveling on my own, I hop into a Cancun Shuttle shared transportation for the 50 minute ride down to Playa del Carmen. They drop me off at my accommodation (Reef 28 Hotel or an Airbnb) and just like that, I’m ready to enjoy my time in this great town. I know that getting from the airport to Playa del Carmen, or even to the Cancun hotel zone, is a major reason for concern for many travelers. The...

END_OF_DOCUMENT_TOKEN_TO_BE_REPLACED

Facebook
Twitter
Google
Email
Pinterest
Odnoklassniki
WhatsApp
Every now and then while traveling, there comes a week when everything magically falls into place, with one remarkable experience after another. Some moments might have been planned, others spontaneous and several completely unexpected, but together, the result is almost hard to believe, in the best way possible. That was my past week, while on a spectacular Las Vegas Grand Canyon road trip. It all began with…   The Las Vegas Experience Despite the 118F (48C) temperatures, we roamed up and down The Strip each day, wandered in and out of the hotels and casinos and spent some time in the Arts District and at the Fremont Street Experience. We went to the wacky and trippy Meow Wolf Omega Mart art installation as well and paid a visit to Gorilla Sushi where we partook in their awesome all-you-can-eat sushi deal. And we stayed at the renovated Flamingo Hotel & Casino, right...

END_OF_DOCUMENT_TOKEN_TO_BE_REPLACED

Facebook
Twitter
Google
Email
Pinterest
Odnoklassniki
WhatsApp
The southeastern Australian state of New South Wales is well known for its national parks, coastal cities, and rugged coastlines. Visitors travel hundreds of miles to explore the Blue Mountains, various surf beaches, and even dozens of wineries within The Hunter Valley region.  As familiar as you might be with the offerings of NSW, discovering group activities can be a little harder. If you’re about to set off on an Australian adventure, here are some not-to-be-missed experiences for you and your loved ones.    Wine Tours Travelers exploring north of Sydney in NSW may end up in one of Australia’s most significant wine regions. Consider the Hunter Valley wine tours as a fun, educational group activity that teaches you about some of the finest wines in Australia.  The Hunter Valley has made a name for itself with Shiraz and Semillon...

END_OF_DOCUMENT_TOKEN_TO_BE_REPLACED

Facebook
Twitter
Google
Email
Pinterest
Odnoklassniki
WhatsApp
From left: Joel Cabrera, Chief Travel Officer and co-founder of Zoom Vacations, walking with his boyfriend Matt on the beach in the Maldives. Landaa / Zoom VacationsSkift Take: It's obviously tremendous for the tourism industry that LGBTQ travelers have been enthusiastic about hitting the road this summer. Imagine how much more revenue destinations could earn if they did a better job of marketing to that community. — Rashaad JordenRead the Complete Story On Skift

END_OF_DOCUMENT_TOKEN_TO_BE_REPLACED

Fourth of July to Mark a Further Rebound for U.S. Domestic Tourism

END_OF_DOCUMENT_TOKEN_TO_BE_REPLACED

UK Opens Travel and 9 Other Top Travel Stories This Week

END_OF_DOCUMENT_TOKEN_TO_BE_REPLACED

British Tourists Return to Magaluf Despite the Caution of Locals

Facebook
Twitter
Google
Email
Pinterest
Odnoklassniki
WhatsApp
A Magaluf resort. The addition of the area to the UK's travel green list means tourists from the area's largest market are returning to the island. Chris / FlickrSkift Take: Throughout the coronavirus lockdowns industry leaders asked the question "how will this crisis change travel habits?" For tourism-reliant destinations such as the Balearics, the answer is likely "not much."— Jason ClampetRead the Complete Story On Skift